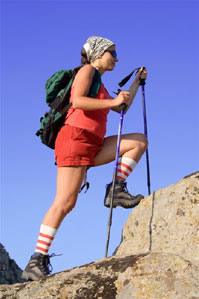 Who among us has not welled up while watching the weight loss sheroes and heroes tell their stories on Oprah or The Biggest Loser?

How about those “I left that son-of-a-bitch with nothing but a twenty-dollar bill and the clothes on my back because I was done with the abuse” stories?

We love to hear stories of success and personal triumph.

How many of us secretly also wish we were the one with the success story?

When we get emotional watching someone else’s harrowing or demanding struggle to a dream realized, it is our spirit that has been touched. It’s the knowing part of you saying “I can do that, I want to be that, I know it’s possible.” And then we turn off the tube or put down the magazine and what happens?

Often nothing. Nothing happens until something does. And what that something is happens to be different for everyone. If desire alone were all it took to make big changes in our lives, there wouldn’t be any WOW factor left — because we’d all be climbing mountains and winning competitions daily, everyone a bionic babe.

So what is that thing that happens? Inspiration + Desire meets something in you which feels so important that what doesn’t support the vision falls away.

One episode of Oprah featured one after the other of those amazing people who lost hundreds of pounds telling their “why.” Of the many I saw, not one person had the same reason for taking on the challenge of releasing what no longer served them; in this case, extra weight.  One woman lost five hundred and thirty pounds! Even Bob Greene was holding back tears. Her why for changing? Something reminded her of her self worth.

Another woman whose husband loved her through thick — three hundred something pounds — and thin told what moved her into action. They wanted to adopt a baby. The agency said they would have to list her as “an oversized” applicant. This lessens your chances and that broke her heart. (Mine too!) Having a family became her focus. Food no longer was.

What if you don’t have one of those Oprah moments where you change on a dime, fearless, and move in the direction of your vision? How do you get to be the one with the good story?

Acknowledge that you are built for success
despite what you see as evidence to the contrary.

Dismantle the fear by asking, “What One Thing?” Do not worry yourself into a stupor about all the things that you don’t know yet that might go wrong — you are living in the future but existing here, now.

In this moment, what would you do first?

But you do. Connect to your inner wisdom.

If you are a planner make a plan, a simple plan, not an architectural rendering complete with elevations of how your feet will look in sneakers. One thing: buy sneakers. Okay, two things: buy sneakers, use them.

“I want to be healthier” is too wishy-washy.

“I no longer want to get out of breath walking up stairs” is stronger.

“I want to lose the 20 pounds I’ve been carrying around for 2 years” is strongest.

Losing 20 pounds will likely end the huffing and puffing and contribute to overall health, and it’s a goal that we can track, it’s measurable.

Acknowledge that it might be scary, that you have no real idea
how to do this thing.
That’s okay.
Begin.

Keep this in mind; there is far more pain in not getting started once you decide you want something, than there is in any step along the way.

Finally, watch how you talk about the challenge and yourself.

Be conscious of what you say because you’ll live right into your words.

The weight loss winners, almost to a one, admitted that they once called themselves a “waste of a life, worthless, disgusting, a failure,” and other nasty names. Once they embarked on their change journeys they were coached to no longer use those words or ways of thinking. They filled their heads with variations of “I am a success” and “I wonder what it will be like when…”

In addition, they each tapped into their inner wisdom and courage. They quieted the despotic voice that had for years held them prisoner and allowed another voice to respond to something they felt on an emotional level. “I am that person who succeeds, I am the one at the top of the mountain, I am the one on the TV show telling my story.” I am, I am, I am.

The good stories all have struggle, failure, fear and a desire to quit as de facto ingredients. Don’t look for ways to avoid them by avoiding the thing you want most. Feel the calling, the inspiration. Look for the One Thing, start there, head in that direction. Tell your story. Inspire others.

We use cookies on our website to give you the most relevant experience by remembering your preferences and repeat visits. By clicking “Accept All”, you consent to the use of ALL the cookies. However, you may visit "Cookie Settings" to provide a controlled consent.
Cookie SettingsAccept All
Manage consent

This website uses cookies to improve your experience while you navigate through the website. Out of these, the cookies that are categorized as necessary are stored on your browser as they are essential for the working of basic functionalities of the website. We also use third-party cookies that help us analyze and understand how you use this website. These cookies will be stored in your browser only with your consent. You also have the option to opt-out of these cookies. But opting out of some of these cookies may affect your browsing experience.
Necessary Always Enabled
Necessary cookies are absolutely essential for the website to function properly. These cookies ensure basic functionalities and security features of the website, anonymously.
Functional
Functional cookies help to perform certain functionalities like sharing the content of the website on social media platforms, collect feedbacks, and other third-party features.
Performance
Performance cookies are used to understand and analyze the key performance indexes of the website which helps in delivering a better user experience for the visitors.
Analytics
Analytical cookies are used to understand how visitors interact with the website. These cookies help provide information on metrics the number of visitors, bounce rate, traffic source, etc.
Advertisement
Advertisement cookies are used to provide visitors with relevant ads and marketing campaigns. These cookies track visitors across websites and collect information to provide customized ads.
Others
Other uncategorized cookies are those that are being analyzed and have not been classified into a category as yet.
SAVE & ACCEPT
+

Submit the form to join us: