Where Do You Stop? 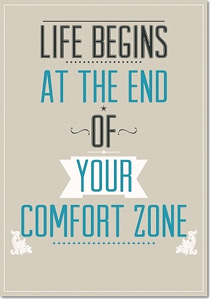 We are sitting across from one another at a large, round table, planning. My mentor had just outlined a new offer for my business, one that would be fun for me, felt like a natural extension of what I was doing then, and was way out of my comfort zone to offer. I knew it would be fun for clients and make a huge difference for them very quickly. I rallied all of my focus, read it through, ran it by my gut, and felt the “Yes!” I was hoping for. And then he asked the magic question.

“Where will you stop?”

Followed by, “What will take you out?”

The ego was quick to reply, “nothing will, I love this idea.”

Wise, and not caring that I might not like him, he said, “You’re full of s***. Your ego is in charge right now and if you won’t look at what might take you out and make a plan to combat it or remove the power it has, you’ll never make a single sale.”

Breathe. Admit he is correct. Get honest and enjoy the process of discovering how to get to success by averting sabotage.

From that day to this, I use this question on myself and with my clients. Why? Because change is hard, and it can take longer than we want it to. Unless we are prepared for the demons and down times, we are powerless to succeed.

Ask any recovering addict if it’s possible to stay sober, food-, or drug-free without knowing where the triggers lay that pull them back in.

In the case of the new program, I knew that pre-judging people’s ability to buy the thing would stop me from ever asking. I also knew that I have a tendency to want to change things once they are created, rather than running with them. Rather than follow the guidelines given by someone who knows how successful businesses run, I might have to play around with it a bit. Self-sabotage has no power when you have a clear sense of what it looks like ahead of time.

This same wise man taught me that many people never get what they say they want because they don’t want it badly enough.

While that’s either sinking in or pissing you off, I’ll share this.

I’ve been saying for years that I want to move.

Let me blame the universe. She wasn’t listening. Maybe I wasn’t clear but I wrote a list of all I wanted in a new house, damn her.

One day I realized that the idea of moving, with its many moving parts, scared me more than it moved me. I was doing almost nothing to make it happen because I didn’t want it as much as I wanted to be comfortable.

What about you? What is the one thing you’ve been saying you want to change, maybe have been working at for years that you can’t seem to realize?

How bad do you really want it?

Are you willing to do what it takes and then some? Are you willing to embarrass yourself miserably along the way to mastering said new thing? Today, I was like a garden whirligig in my aerial yoga class. My foot got stuck in the yards of material and gave the class a giggle when I ended up unable to free that foot from the cloth all the while it was spinning and rocking back and forth.

I don’t care at all because I will master this and be graceful. Not only do I enjoy it, but it helps keep my back flexible and my core strong. Two things I am committed to so I can continue to move and be flexible in my next decade. When it comes to aging, I will do what it takes to maintain my independence.

When we want something bad enough, nothing will stop us. One of my favorite people who happens to be a super successful business owner moved herself from one side of Canada to the other, at 55, all alone, with only one small bag, to get away from a relationship that was smothering her. She started over from nothing, and four years later she is just shy of making a millions dollars.

A former client of mine who said she had never been able to lose weight in her life but wanted to ride through the mountains in Peru for her sixtieth birthday — 7 months from when we first met — said she’d do whatever it took. She had 30 pounds to lose and muscle to build. She lost the weight, gained the stamina, and realized that until that birthday dream, she hadn’t really wanted to change enough to do what it took. And all it took was her willingness, and knowing what would take her out so we could plan ahead.

Why not use my mentor’s questions on your stuck place? There is nothing wrong with saying I don’t want this badly enough to do any more than I’m doing. At that point you can let go of the thing. Why keep it hanging around like torture? Put it away for a bit. If it won’t let go, review the things that derail you and create an anti-sabotage plan. If you are sure you want to do what it takes, then it’s time to get some help to devise a course of action that’s going to work — and work in the shortest time possible.

We all stop. We all fall, of course. Those with the good sense to know that and prepare are the ones who feel the Yes! Oh, what a feeling.

We use cookies on our website to give you the most relevant experience by remembering your preferences and repeat visits. By clicking “Accept All”, you consent to the use of ALL the cookies. However, you may visit "Cookie Settings" to provide a controlled consent.
Cookie SettingsAccept All
Manage consent

This website uses cookies to improve your experience while you navigate through the website. Out of these, the cookies that are categorized as necessary are stored on your browser as they are essential for the working of basic functionalities of the website. We also use third-party cookies that help us analyze and understand how you use this website. These cookies will be stored in your browser only with your consent. You also have the option to opt-out of these cookies. But opting out of some of these cookies may affect your browsing experience.
Necessary Always Enabled
Necessary cookies are absolutely essential for the website to function properly. These cookies ensure basic functionalities and security features of the website, anonymously.
Functional
Functional cookies help to perform certain functionalities like sharing the content of the website on social media platforms, collect feedbacks, and other third-party features.
Performance
Performance cookies are used to understand and analyze the key performance indexes of the website which helps in delivering a better user experience for the visitors.
Analytics
Analytical cookies are used to understand how visitors interact with the website. These cookies help provide information on metrics the number of visitors, bounce rate, traffic source, etc.
Advertisement
Advertisement cookies are used to provide visitors with relevant ads and marketing campaigns. These cookies track visitors across websites and collect information to provide customized ads.
Others
Other uncategorized cookies are those that are being analyzed and have not been classified into a category as yet.
SAVE & ACCEPT
+